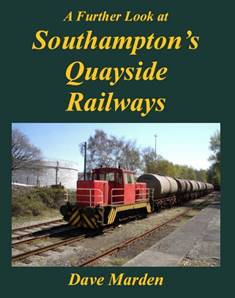 has long been famous for its docks, but the port also spreads along the banks of the rivers Test and Itchen.  Here, lesser wharves have seen their share of rail traffic, and along the whole waterfront, cargoes were moved for over a hundred years by a varied assortment of locomotives working behind the scenes.

In this second book about Southampton’s industrial and minor railways, Dave Marden has included locations that are slightly further afield, although still within the area.

The book also features non-steam traction and narrow gauge lines, and while some of the subjects might be a little removed from the more recognisable classes of locomotive, their diversity of design and employment makes them all the more interesting.  Some of the lines covered in the previous book have been revisited, particularly those where steam power was superseded by diesel.

The two volumes together present a useful and informative guide to the railways and locomotives that have graced ’s waterside – not always attractive but certainly honest and valued workhorses that played such an important role in the city’s industrial development and history.

“This is an excellent regional industrial railway history/geography which will be a useful companion to its predecessor.”  Railway Modeller

“Like the first volume this book is packed full of information associated with both the docks and the railways of the Southampton area and is a vital requirement to (anyone) who has other than a passing interest in both the port of Southampton and its associated railways.”  South Western Circular