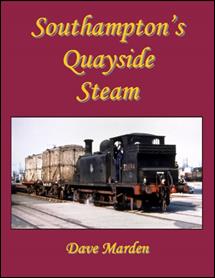 has long been famous for its docks, but the port also spreads along the banks of the rivers Test and Itchen.  Here, lesser wharves have seen their share of rail traffic, and along the whole waterfront, cargoes were moved for over a hundred years by a varied assortment of steam locomotives working behind the scenes.

In this book, author Dave Marden has compiled a comprehensive record of the steam-operated locations within the docks, wharves and piers of the city’s waterfront.  Concise histories of each location combine with individual details of the locomotives, following their journeys from various builders’ works to their ultimate fates.  Also included are details of the many contractors locomotives that have been engaged in the numerous expansions of the docks.

The overall result is an extensive and detailed insight into the lesser-known, and certainly less-glamorous, steam engines that have worked along ’s quays.

“Contains a vast amount of facts between two covers, and a quantity of photographs which alone justifies the cover price.”  Historical Model Railway Society