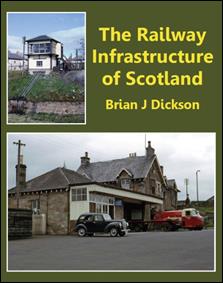 The Railway Infrastructure of Scotland

This book is a compendium of the building styles that could be seen throughout the Scottish railway network.  It does not cover the large city centre stations of Edinburgh and Glasgow, but shows the wide variety of construction methods used across the country.  For example, the beautifully constructed masonry building of the Highland Railway’s Moy station contrasts with the well-balanced wooden stations at Cullen and Portsoy on the ex-GNoSR.  Similarly, eccentric examples such as the “Swiss Chalet” style of the West Highland Railway can be seen alongside the lavish Caledonian stations at Stirling and Wemyss Bay.

Included throughout are examples of the signal boxes constructed by the five pre-grouping companies.  The illustrations range from the smallest wooden examples, such as Lairg, to the large elevated example at Dyce.  More ornate signal boxes were constructed by the Caley, whose “house style” could be seen in the smallest and largest examples from that company.  Also covered are examples of locomotive depots, which varied greatly in style from the neat, one-road wooden shed at Dornoch, to the impressive stone-built examples at Ayr, Aviemore and Kyle of Lochalsh.

For railway modellers this book offers a wealth of previously unpublished material showing the detail and ephemera required by them to enhance or even inspire a model layout, but the book will appeal to anyone with an interest in railway architecture, and that of Scotland in particular.