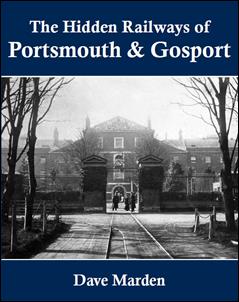 The Hidden Railways of Portsmouth and Gosport  Very few left

This book looks at the lines around that were operated mainly by the Admiralty and the Military, far from the public gaze.  These secretive systems were often obscured by high walls, and most glimpses would have been through closely-guarded gates, with the occasional sight of a train joining the main line.  This book brings together data, illustrations and potted histories to give an insight into the locations and operation of these concealed railways.

Of prime importance to Portsmouth is the naval dockyard which was home to over fifty locomotives over the years, but other associated facilities included the Naval Armament Depots at Gosport, the Gunnery School at HMS Excellent on Whale Island and the Army’s presence at Hilsea Ordnance Depot – all of which are included.

Several large-scale construction projects also feature, as do railways and locomotives that do not quite fit into the Military or Contractors categories, such as the Stokes Bay Pier and the Lee-on-the-Solent railways.  While these were not concealed from the public eye, they are of interest, and are appropriate to the theme of the book.  Included for completeness are the dockyard branch lines, the industrial railway at Hilsea Gasworks, and Pounds Yard at Tipner.  Although not exactly “hidden”, they were beyond public access and fit well into this volume.